skip to main | skip to sidebar

Is Jeff Hawkins also the father of netbook? 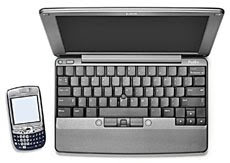 If the scenario was like this: After Jeff Hawkins, the father of the PDA and early smartphones, also the man who cofounded Palm Computing introduced the Foleo at All Things D converence in May 2007, then the new management team at Palm that time lead by Ed Colligan decided to go on with the production plan for Foleo; the world would have see Foleo as the pioneer of the netbook category.

And automatically, Jeff Hawkins would also be widely known as the creator and the father of netbook. But alas, that's not what happened...

Asus has taken away the title, when the Taiwan-based computer manufacturer released its famous Eee PC 701. Marking the birth of netbook category, and making Eee PC as one of the first netbooks to be commercially produced and marketed. Soon as we all know it, many other major computer manufacturers follow suit by releasing their own netbooks. Even the definition price of netbook (under $500) which is said by Steve Jobs himself, was once the original price set for Foleo (to be sold at $499) has no longer seen as a barrier to buy netbook anymore.

Although for Palm loyal fans, already know that Jeff Hawkins is the first to envision how today's smartphone prowess is not going to be enough to deal with the extensive usages such as writing/reading long email, notes, web & watching lenghty videos. It's after Tim Bajarin from PC Mag wrote an article about this, that the world should now acknowledge Jeff Hawkins as the visionary man who see the real strength of netbook: persistent connectivity.

Why constant connectivity becomes so important for netbook? For mobile addicts, like you and me, the answer is simple enough: because becoming productive while you're on the go is what we aimed for with our smartphones and mobile devices. The cloud computing era is at hand, and it is where we all are heading to. And the basic idea of cloud computing, is to be able to connect to the internet at all time, everywhere anytime.

Now who dares to mock the idea behind Foleo...? ;-D

This is my personal weblog, meant for archiving my posts. The contents are not always about Palm; but also news around the mobile life & technology.

And as I've mentioned before, that I'm the PalmAddict Technical Editor & also the Asia Editor; so most of the blogs I've posted here are the same ones that you'll read on PalmAddict weblog.

I hope all of you enjoy reading these blogs, as much as I've enjoyed posting them almost everyday.

I recently came across your blog and have been reading along. I thought I would leave my first comment. I don't know what to say except that I have enjoyed reading. Nice blog. I will keep visiting this blog very often.